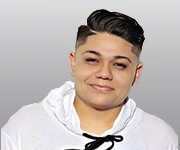 Johanna’s biggest influence was her family that was well rounded with many musical styles.
From all of her influences, she became a bilingual open format DJ.

DJ 2Lips believes that music has always had a way of bringing up the most intense emotions that a person could experience. When starting on a set, she enjoys channeling all the room’s emotions into the turntables by understanding a group of people and taking them to the highest level of energy she can bring. She wants to make people feel like they can get away from their troubles or routine and travel down memory lane. She understands the importance of that one special day by elevating those truly memorable moments to the highest level by one set.

DJ 2Lips’s goal and focus are to land on the airwaves for an open format on-air radio station.