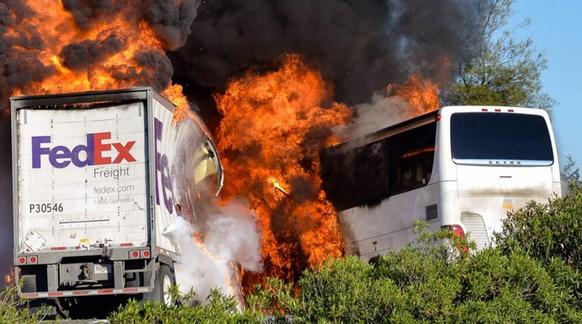 An explosive crash involving a FedEx tractor-trailer and a bus carrying Los Angeles-area students on a Northern California freeway Thursday afternoon has left 10 people dead and dozens of others injured.

Those killed include five teenage students, three adult chaperones and both drivers, authorities have confirmed.

The bus carrying the students was on its way to Humboldt State University in Arcata when it was believed that the tractor slammed into it.

Approximately 48 people were on the bus, 43 of them were students.

Los Angeles Unified School District (LAUSD) officials said 19 of those students were from 15 schools throughout the district.

“These were students who were graduating, and….were going to a place that was one of their dreams, so that’s quite painful,” said LAUSD Superintendent John Deasy in a news conference.

Students were on their way to tour Humboldt State. Their bus was one of three heading towards the campus.

So far, only one victim from Rancho Cucamonga has been identified.

The exact cause for the crash remains unclear, CHP officials said. They added that a final report will be available in three to six months.

More Latinos Are Getting Admitted To UC Schools